I have always loved exploring other cultures. So it was no surprise that one of the many things that attracted me to my husband was the fact he was from a completely different cultural background than I. My hubby grew up in Port-au-Prince on the island of Haiti speaking French and Haitian Creole. That couldn’t be much further from my experience growing up at the base of the Rocky Mountains in Colorado as an English-speaking American of German/Czech/Polish descent. Our backgrounds were so different! I’m embarrassed to admit this, but, before I met my husband, I couldn’t have pointed out Haiti on a map if you paid me a million bucks.

Despite my abysmal geography record, here we are, six years later raising our little boy together. First, I feel fortunate we have this ability knowing that even a couple generations back our multicultural and interracial family wouldn’t have been legal or socially acceptable in the United States. And with that in mind, I feel a special responsibility to give both our cultural backgrounds equal weight as our son grows into his identity as a Haitian American.

Easier said than done! And, I have a feeling that my experience is shared by many moms and dads who find themselves trying to parent based on very different sets of beliefs, values, and practices related to parenting.

The moment that highlighted this for me happened after I returned to work from maternity leave. At the time, my mother-in-law cared for our little guy at her house while we worked. He had the first cold of his life, and after my husband dropped him off that morning he called me to say, “The little guy is really congested. But don’t worry, I told my mom not to do anything Haitian to him.” My hubby knows me well, and knows that I am very much of the modern medicine mindset typical of many Americans. Grandma, on the other hand, is of the herbal and traditional Haitian healing school of thought. And rarely the two seem to meet. With memories of my husband telling me she slathered his head in some sort of stinky herbal mixture when he had lice as a kid, my immediate thought was, “Please no!” And, of course, when I picked him up that afternoon my six-month-old had been given the Haitian treatment (a little traditional oil rubbed on his chest and under his nose).

And I felt terrible. Not because grandma had done anything wrong, but because I was so convinced that my way was the only “right way,” that I immediately discounted any alternatives. Trying to raise our son in a way that honors all of his cultural backgrounds has helped, and sometimes forced, me to become consciously aware of my own cultural beliefs, values, and “truths.” It has stretched my perspective in the same way that traveling to new places does. 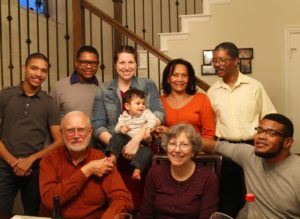 While growing and stretching my cultural perspective was a bit painful in that moment, it ultimately reflects many of the core values I hope to teach our son: Openness, self-awareness, and an appreciation for many different ways of living, being, and believing. And to me, that’s the heart of multiculturalism.

This means that I will agree when my husband suggests feeding our son spaghetti with hot dogs and ketchup for breakfast (I confirmed this is a real thing when I saw it on a menu in Haiti), despite the fact that my internal reaction is, “Um, what?!” On the other side, my husband watches as I sanitize the heck out of our son’s room, playfully lamenting what he calls American germaphobia.

Especially since our little guy was born, our favorite family holiday has become Thanksgiving. While this is a uniquely American holiday, it is a uniquely Haitian American event in our house. The whole family gets together, and the table is covered in turkey, potatoes, and stuffing . . . and griot, djon djon, and tarte a l’oignion. As my dad puts it, it’s like the original Thanksgiving. Two cultures meeting, eating, and appreciating one another. More than anything, it’s just a boatload of fun.

I don’t know how my son will identify culturally as he grows older, but I’m hoping that he won’t have to choose among the many options. I’m hoping that our rich culture right here in Fort Worth, Texas will embrace his, and every child’s heritage, as valuable. I don’t know about you, but I think we can do it if we’re willing to stretch and grow a little bit . . . and eat spaghetti and hotdogs for breakfast after sanitizing the table!

How have you celebrated the cultures in your family as you raise your children?