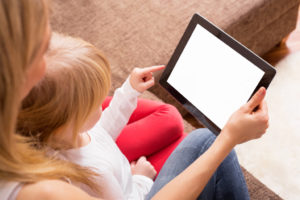 The topic of kids and screen time seems to be a topic that is regularly in the news. I’ve seen screen time described as “digital heroin” by news sources with reports that it can turn kids into “psychotic junkies.” Wow. That’s powerful stuff and, in my opinion, it couldn’t be more wrong.

Recently, the American Academy of Pediatrics (AAP) who previously recommended no screen time before the age of two loosened its recommendations around screen time. It seems it’s more about what kids watch and with who — rather than just being a matter of how much. It seems the AAP is acknowledging that there’s a difference in kids watching a couple hours (not all in one sitting) of Sesame Street versus playing violent video games for two hours straight.

As for our family, we have been subjecting our daughter to “digital heroin” for quite some time, rather guiltlessly, I must admit. We rarely go anywhere without Avery’s tablet. Yes, I said it. Avery is not yet three and has her own tablet. It is used multiple times on a daily basis for a variety of reasons. I don’t know what we’d do without it.

Now, before you go writing me off as a bad mom, let me explain.

To keep her still. Avery is busier than most toddlers and rarely sits still. From the moment she wakes up to the moment she goes to sleep, she is in constant motion. She has an autism spectrum diagnosis and sensory integration issues. Movement is calming to her. The one thing that gets her to sit still longer than a few minutes is her tablet and the nursery rhyme or truck videos that she adores.

Beyond the expected reasons why you might need or want a toddler to sit still, we have a few extras:

Doctor’s appointments. She has a TON, and as you know, doctors don’t always run on time. I’d rather have her watch a video than causing a scene in the waiting room due to a long wait.

Breathing treatments and other medical procedures. Avery has chronic lung disease, an after effect of being born extremely premature. Watching videos is the only thing that keeps her still enough to get the breathing treatments she often needs when she gets sick. She also has to get echocardiograms, sonograms of her heart, which require her to stay extremely still. Several months ago, she had to get stitches in her bottom lip. Guess what? Her tablet kept her still AND calm!

Weight gain. One of the reasons experts are so against kids and screen time is because of the childhood obesity epidemic sweeping the country. We have the opposite problem. We struggle to put weight on Avery. We add things like butter and coconut oil to her food. She burns calories the minute she wakes up and starts running around the house, pushing around all her toys. Because her lungs were damaged at birth, she burns even more calories than an average toddler because breathing requires extra effort. If I can get her to sit still for a few minutes a day, that’s a few less calories she’s burning.

It’s a therapy tool. Avery is currently in Applied Behavior Analysis therapy, an evidence-based method used with autistic kids. At a very basic level, they use a motivator, like a tablet, to elicit a desired behavior. In Avery’s case, we are working on eating. She eats, and she gets to watch her video. If she rejects her food, the video gets taken away.

She learns stuff. Most times, if Avery is watching her videos, she’s watching them with someone. We’ll sing along to the songs and point out the different shapes or animals they are singing about. Recently, we were watching a video about colors and she started naming them. She was saying words I’ve never heard her say before.

I need a break. There, I said the thing you’re not supposed to say. I work full-time and my husband works late hours, which means it’s just her and I on most weeknights. Luckily, she is an independent little girl who is pretty happy playing alone. But, for those times when she’s insistent that she needs her mommy and I’ve GOT to get stuff done, the tablet serves as a welcome substitute while I shower or make dinner. There are also those times when we’ve played together all day and I’m exhausted. I am ALL played out. So, I’ll turn on her videos, put her in my lap and we cuddle while singing “Old MacDonald” or “Mary Had a Little Lamb.”

So, there you have it! I don’t think Avery gets more than the recommended limit of two hours a day of screen time, BUT I definitely don’t keep track or stress over it.

Tell me . . . are there certain parenting “rules” you are breaking or recommendations you are going against? Come on, make me feel better!