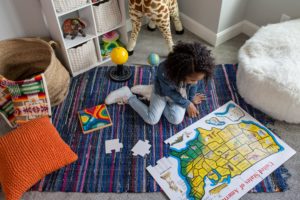 Oh yes. Summer. That time of year where moms everywhere feel the need to rock in the fetal position in a corner, wondering how on earth to fill the ENDLESS hours of all. that. togetherness.

Logic tells us it’s not our job to entertain our kids 24/7.

Emotions tells us otherwise. Especially when we are outnumbered by the small army we’ve created and they are all using their whiniest, loudest outside voices to clearly express their complete displeasure and the demands of their ransom — which are: to dispel the boredom.

Routines to Help with Boredom

Back in the day when my trio was young, I tried to stay ahead of the curve, bracing myself as summer approached. With a bit of trial and error, I devised a plan with three practical tools.

First, I came up with a daily routine. This was not so much a timed schedule as it was a flow to the day to help us all feel a sense of structure. Before my children could read, I created a chart with pictures on it, slipped it into a plastic sleeve, and then put it on the refrigerator. The chart included photos depicting meals and snacks, and the mornings included outings such as the park or the library, squeezing in errands with the fun, in order to avoid the afternoon heat.

After lunch, the children were allowed one 30-minute show before “room time,” which was an idea borrowed from a friend and utilized every summer up through elementary school. Though two of mine were good nappers, one was not. No matter, all the children were given the great opportunity to go play quietly in their rooms and they didn’t even have to sleep! I’m a generous mom that way. They could read, nap, or play with their toys in their rooms until I came to get them, which was an hour at least. If they came out to ask if room time was over, then they got five more minutes.

Having set rhythms helped with boredom, but it didn’t avoid it. But, not to worry — I had two back-up plans. We had a “things-to-do” jar with slips of paper offering ideas from a brainstorming session we had together. Some of the ideas were a car wash, involving their toy cars with soap and sponge in the kitchen, craft kits from the dollar store, and finger painting with shaving cream in the shower stall.

And then, I had my ace in the hole. I even threatened my college son recently with the “I’m bored” jar. This jar also had slips of paper with ideas, but they were chores they were invited to do to pass the time if they couldn’t figure out something else. Think along the lines of scrubbing the toilets, wiping down the outdoor table, and cleaning the sinks.

Looking back, if there is one thing I would do differently, it would be to not worry so much when my children bemoaned boredom. I actually wish I could tell my younger mom self to bring on the boredom and welcome it with open arms. What time gradually revealed to me is that on the other side, through the tantrum or outburst, creativity and imagination were given enough room to find root.

We’ve become such a culture of constant entertainment that I’m afraid we may be denying both ourselves and children the type of leisure from which ingenuity can be cultivated. It was a bout of boredom that led my children to grab an old dog leash and hook it to the top of the stairs and the front door in order to create a zipline for their stuffed animals. It became a game they enjoyed for years.

Allowing boredom communicates to your children that life should include breathing spaces. It spurs self-reliance and inspires resourcefulness, which are incredible life skills. When we set our sights on the long game of parenting, it can equip us to allow our children to experience failure, natural consequences, and yes, even boredom. It’s the momentary pain that can birth these lifelong gains.

I know this is easier said than done. I know I’m that older mom spouting wisdom from what may feel like a place of being irrelevant, because my children are self-sufficient. But, I’m quite into the long game here, and I can see that boredom was not the dreaded beast I made it out to be when wrangling wee ones. In fact, when we sit around the dinner table and chat about favorite memories, my kids often note things like building forts, creating a castle from a large box, and a spontaneous water balloon fight one hot summer day. The common denominator among these activities is that they were preceded by cries of boredom.

So, bring it on, mamas. Let boredom have its place and encourage your children to see what might come from it.