My children are half Caucasian and half Mexican. One day, I hope there won’t be a need to state that, but, for now, there is.

You see, biracial couples, and especially their children, aren’t seen by some as normal. My husband and I have both experienced negative reactions, even hate, because of our relationship. We get stares and whispers just going shopping. We hear people say:

Believe it or not, it just got worse after we had kids. Now some people say:

My kids are expected to be more white than I am and more Mexican than my husband.

How do you raise children in a world like that? How do you raise them to believe they’re amazing when they can hear people say they’re not? How do you explain that some people don’t think they should exist? How do you tell them to love everyone despite how they look when others tells them their parents’ marriage is an abomination at worst or a bad idea at best? 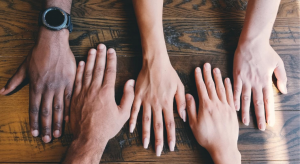 I used to think the answer to these questions would forever evade me. I never thought I could deal with the looks on their faces. However, the longer my husband and I are together the easier I find it to answer these questions. I’ve found the answer is actually quite simple: Be. The. Example.

It’s impossible to protect your kids from the evils and ugliness of the world — no matter how much we wish we could. However, children don’t learn beliefs from strangers. They don’t learn right and wrong or kindness and cruelty from John Smith on the street. They learn it from us, their parents. They mimic our actions and words. If they see us extending grace to those that are cruel to us, they will learn to extend grace as well. If they see us not making a big deal out of the fact we are from different cultures, they won’t see that it’s a big deal. In fact, to them, it’s normal.

Changing society starts with us. It’s up to us to raise our kids not to tolerate prejudice and to teach them that blending cultures and races is amazing and normal. The only way for us to do that is to be the example. We have to show our kids and support the beauty of a blended family.

Because that’s the thing: Being biracial, or even multiracial, doesn’t make them lesser than; it makes them more than. They’re twice as cultured. Multiracial kids have an ability to adapt and overcome. Most, like my own children, are raised in bilingual households. They grow up learning two or more languages. Once we normalize multiracial and multicultural households, our kids won’t be scared to date, marry, and have kids with people of other cultures and races. Our grandchildren won’t even bat an eye at it; because the only hope for the future of humananity is our children.

So how can you set the example? Whether or not you are a part of a multicultural or multiracial family, you can help and be an advocate for those that are.