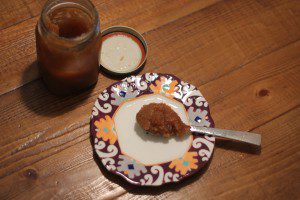 For as long as I can remember, my grandpa has been digging dirt out from under his fingernails. Strawberries in the spring, tomatoes and cucumbers in the summer, beets and apples in the fall. His body never seemed to tire from the hours of planting and watering and tilling and picking and boiling. In fact, it was as if the time in the garden was more rejuvenating than a full night’s sleep.

Perhaps, having never experienced it on my own,  I underestimate the satisfaction that comes from shelves full of your own pickled goods or from jars stacked three or four high of delicious, home grown jams. Canning, an art form that faces extinction, wasn’t something “Junie” approached as a novel idea that he picked up on Pinterest. He never googled the best fertilizer or posted a picture of his product with the hashtag #hardworkpaysoff. Instead, he spent his evenings working the ground, and clocked the changing of seasons by what he could pick and when. 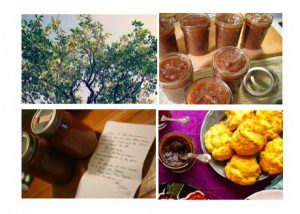 I have early childhood memories of seeing my grandpa sitting at the “snackbar” in the kitchen, peeling buckets of backyard apples with a spiraling gadget and then slicing and chunking by hand. His wood handled pairing knife is one the Farmhouse kitchen tools I covet the most, not for mere utility (although its longevity is unmatched by any knife you could buy in the stores today), but because it has been lovingly gripped by his strong, calloused hands for the span of my life and beyond.

His apple butter is incomparable, jarred with a simple address label, and stored on hand-crafted shelves in his garage. He gives it away to mourning townspeople or church friends that sit on his pew, and  he keeps a jar in the fridge for company that drops by.

Junie’s apple butter isn’t fancy, and doesn’t need to be. The savory sauce stands fine on its own without the display of sterling spoons or pretty plates. It’s delicious on biscuits or perfect by the spoonful to start or end your day with the taste of something sweet. I can’t fully accept autumn’s arrival without a bite of it. 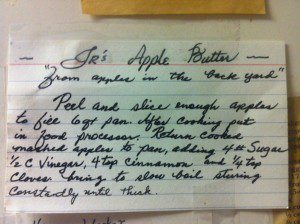 This recipe, along with all the other “Farmhouse favorites” is taped to the inside of their kitchen cabinet, a cabinet that from a granddaughter’s perspective deserves a place in the Smithsonian.   Jr.’s Apple Butter “from apples in the back yard”   Peel and slice enough apples to fill 6qt. pan. After cooking, put in food processor. Return cooked, mashed apples to pan, adding 4 pounds of sugar, 1/2 cup vinegar, 4 tsp cinnamon and 1/4 tsp cloves. Bring to slow boil stirring constantly until thick. 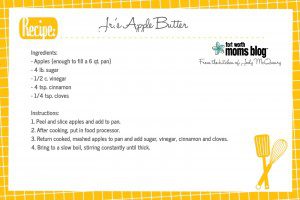 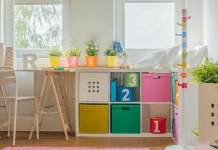 3 Ways to Transform the Playroom to a Tween Space 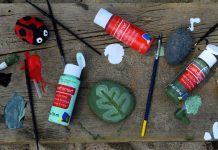 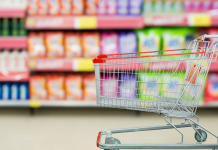