This editorial series, Hot Topics, is brought to you by the Fort Worth Moms Blog and iCare Emergency Room & Urgent Care. All 15 original articles from the Hot Topics series can be found on our website.

I love politics. And politics drives me crazy. Energizes and devastates. Validates and embarrasses. We talk a lot about politics in my home, and because my kids are older, there is often good discussion or debate. But the craziness of the current politically-charged climate, exacerbated by a 24/7 news cycle and social media, means a lot of things can be misunderstood.

Because I don’t totally agree with my parents about politics, I’m assuming some or all of my kids will disagree with me. And that’s all right. That shouldn’t surprise any parent, because hopefully we’re raising our kids to learn to think, discern, and work out their own convictions. So I’m not writing to inform your politics, but I’m sharing some things I teach my kids about engaging in politics. 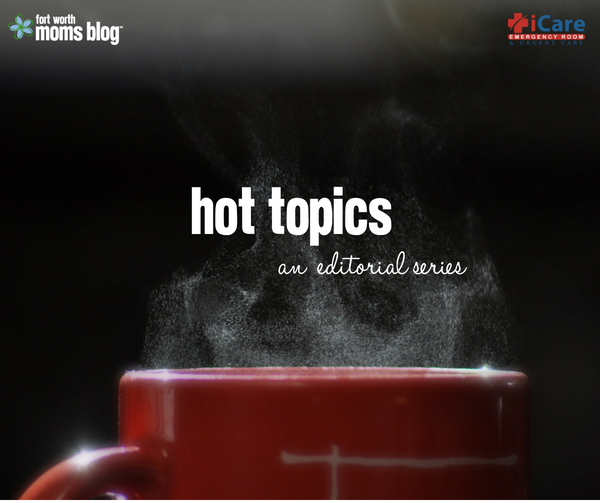 We all need to be willing to really listen to what others are saying. Sometimes this results in me realizing there are problems with my views on something, and other times listening just helps me to understand someone better. Disagreements still exist, but my kids need to know we should always be learning from those around us.

Being humble enough to admit you could be wrong is an uncommon trait today, and I’m just as guilty as the next person of refusing to acknowledge the viewpoints of others. Getting into the habit of listening while they’re young will serve my kids well, as the need to listen to and learn from others will continue their whole lives.

Be FOR Something, Not Merely Against

I’ve had this discussion many times with people, and it can get a bit sticky. You don’t have to agree with me here, but I constantly tell my children they need to stand for something. I don’t want them to side with a politician or candidate simply because they’re not “the other guy,” but because that person holds similar ideals.

While none of us will ever like 100 percent of what something says/does/believes, hopefully if we support someone, there will be a lot of common ground. And I reject the nonsense that says if you don’t vote red or blue you are blindly throwing away your vote. Around here, we often reference these wise words from John Quincy Adams: “Always vote for principle, though you may vote alone, and you may cherish the sweetest reflection that your vote is never lost.”

I have friends who always vote Republican, friends who are Democrats, and still others who, like me, identify as Libertarian, Independent, or other categories. For the most part, I’ve managed to keep good friendships with folks in all categories, and I’m happy my kids get to see there can be good, rich growth even when there are major disagreements. For some of us, this can get tricky when a political issue is closely tied to moral or ethical issues, but these are still opportunities for us to be gracious.

I remind my kids the way they earn the right to speak into people’s lives is by loving them as they are. That doesn’t mean capitulating or compromising, but it does mean we believe everyone is valuable and worthy of relationship.

Hopefully my kids will care about what’s going on in their country. From leadership to laws, from processes to substance, I want them to be engaged in some way. So we’ll keep talking a lot about stuff on the news, things they read on the Internet, and what they hear their friends saying. And I’ll also make sure they hear me say there are still more important things in life than politics. That’s good news, folks.