Pink paint. Pink acrylic paint. On the carpet in copious quantities. Trust me on this one, it is about as miserable it as it sounds.

This is a story about grace.

Let Me Back Up

It was strangely quiet.

(Moms, you know that “quiet” only means one thing: looming disaster in some shape or form. However, if you are anything like me, you never actually remember that quiet = looming disaster, and you instead decide to bask in the beauty of it and regret it immensely only moments later. Am I right?!)

It didn’t take long for my five-year-old Punky Brewster to walk in the room, curl up on the couch next to me, and say, “Mom, I have a little problem that is actually kinda big.”

I have told my little tornado about 1,842 times that her new birthday paints stay in the kitchen. You see, when you ask her what her favorite color is, she confidently replies, “All the colors of the rainbow!” She believes everything — the walls, tables, and floors, look better with color. Because of her unique artistic expression, we have learned to keep all forms of color sequestered to places with non-porous surfaces. It’s called compromise, people!

So, when my daughter came to me — tears welling up in her eyes; lips quivering; hands, face, and dress covered in pink paint — I instantly knew we had a not-so “little” problem that was, in fact, quite large.

I Wanted to Be So, So Angry 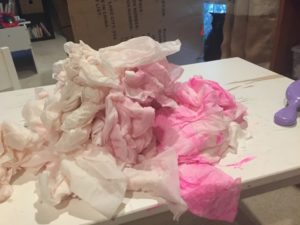 As I sat there blotting, wiping, spraying, and scrubbing the bright pink playroom carpet, she sat close by watching with obvious remorse in her eyes (or possibly fear of the looming consequences?) I was beyond frustrated that THIS was how I spending my “quiet evening.”

However, somewhere in the middle of mounds and mounds of paper towels, all in various shades of pink, I kept hearing a little voice saying, “Be grateful she felt safe enough to tell you. Don’t ruin that.”

Am I parenting in a way that creates fear in my children? Or am I creating a home where my children feel safe enough to make mistakes, tell me about those mistakes, and trust me enough to help them work through the problem?

After the mess was cleaned 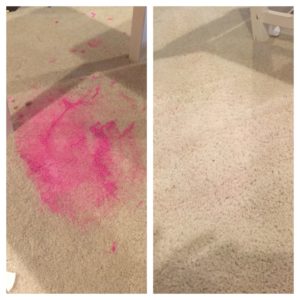 up (it miraculously all came out!), my little hot mess and I sat down for a long conversation. I expressed my disappointment that she chose not to obey the rules that I set before her, which caused instant tears. I also explained to her how hard it is to see her and her brother not respect the things in our home that we have worked really hard to provide. Then I went on to thank her. I thanked her for trusting me enough to confess a really, really hard mistake so I could help her find a solution. We discussed the importance of honesty, even when it is scary, and the value of trust between a parent and a child. I explained how, because she chose to tell me the mistake on her own, her consequence was much less severe than if she tried to hide, cover up, or lie about her mistake. In that moment, the “Pink Paint Rule” was born.

Only a few weeks later, my older, very well behaved (at school, at least!) son got in the car after school strangely quiet. After a few short minutes, he told me he needed to talk to me privately when we got home. As soon as we walked in the door, he took my hand and led me to his room, where he broke down into tears. “I got on yellow today, Mom. I shouldn’t have been talking, and I was!”

My heart melted. The Pink Paint Rule was back and in full effect.

As my children grow up, these mistakes are likely going to become much bigger than just pink paint on the playroom floor. Quite honestly? I want them to make mistakes! Especially when they are still under my roof. I want them to figure out what THEY believe in their heart of hearts, and the only way they will do this is by experiencing life. My hope is to instill an intrinsic belief system that will shield them from making mistakes that could really ruin their lives, but I also want them to feel the freedom to learn on their own the difference between wrong and right. And when the time comes that they really screw up, and don’t quite know how to move forward, they will trust me enough to help.

My little Picasso’s spunk for life quickly returned that Pink Paint evening. Her brand new birthday paints stayed in the trash can, but hopefully her trust in me (and mine in her) didn’t go to the dumpster with them.