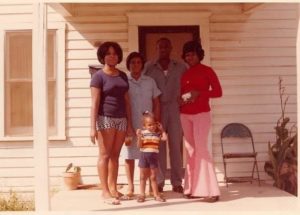 This topic seems a bit strange coming from a mother of four, but I’m actually speaking from very personal experience. You see, I’m an only child! So whether you’re a parent who made the choice to only have one child or the choice was made for you, I’m here to dispel four of the myths associated with only children. Not only was I raised as an “only” (I have half sisters and brothers, but we were raised in separate states), but I was also raised by a single mother. What some might call a double whammy.

I just realized that even though I’m an adult I still tell people that “I’m an only child,” when asked whether or not I have siblings. Besides, the term “only adult” just doesn’t sound right, so for the remainder of this post, I’ll simply refer to us as “onlys.” The following four words are ones that I’ve heard the majority of my life as pre-judgement of my character, simply because there were no other children being raised in my household.

Spoiled: This will depend on your definition of the word, but to me it means someone who gets everything they want and is never told the word “NO.” This is not the life of every “only.” I was told “no,” “not now,” “not yet,” “not ever,” “no not never.” You can’t have this, that, or that. You can’t go here, there, or anywhere. Get the picture? Same questions, same answers, same rules!

Lonely: Umm . . . NOT! As an “only,” I learned to enjoy my own company. There’s a difference between being alone and being lonely. Yes, I was alone at times, but rarely, if ever, was I lonely. Being alone gave me the opportunity to get to know myself, something that a lot of people have yet to do. It also gave me the opportunity to figure out what it is that I like without the influence and opinions of others — something that I truly appreciate as an adult. Besides, if you can’t enjoy your own company, who else will?

Anti-social: Applies to some, but not to all. Not just because we’re “onlys,” but because we’re human. Although I consider myself a homebody I don’t attribute it to being an “only.” I can be quite the social butterfly. In fact, the majority of my jobs have been in customer service, requiring me to abandon any and all anti-social tendencies.

Selfish: I saved the best for last. For me this is the one that’s the furthest from the truth. I will and have given the shirt off of my back. One of life’s pleasures for me is putting a smile on the faces of others. I sometimes think that being an “only” somehow has had the opposite effect on me. I seem to at times go overboard with my generosity. Don’t know where I learned the art of sharing, but it’s been engraved on my heart. The moment that I detect or am made aware of a need or want, I feel it’s my unselfish duty to help, assist, satisfy, or fulfill.

Don’t get me wrong. I’m not saying that there aren’t some “onlys” that fit the stereotypical “only child” myth mold, but for the most part I think people are just people.

So what’s your opinion about “onlys,” and, if you’re an “only,” what other words have been used to describe you?